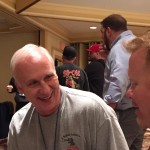 Mike Melasecca of Pennsylvania’s All Star Window Cleaning said he was ready to throw in the towel.
As a window cleaner who added pressure washing as a way to make more money, Malasecca found it costly and extremely time consuming. “I was aggravated and ready to stop offering pressure washing services altogether,” he explained.

Then he saw that Jack Kramer of A Brilliant View Power Washing and Seal Coating was offering a two-day pre-seminar class in his area, and Melasecca decided to attend. And he’s “so glad” he did.

“Jack taught me what I was doing wrong and how to work faster and more efficiently. Today, I do more pressure washing and roof cleaning than windows. Jack’s class completely changed my business.”

In fact, Melasecca was so happy that he took Jack’s class again last year at the Bethlehem, Pennsylvania event, this time bringing his brother along.

“It’s always good to refresh, and I definitely picked up some new things the second time.”

Jeff Scott – owner of Green Window Cleaning Services and founder of Safety Green High Rise Rope Access / RDS Training – attended Jack’s pressure washing class this past January in New Orleans. “I needed instruction. I had seen people cleaning roofs and studied up online, but I was still doing it wrong,” Scott explained. “I was ruining pumps left and right and it was very frustrating.”

After leaving Jack’s in-depth course, Scott said it was some of the “best money” he ever spent.

“I had heard nothing but great things about Jack and his class, and everything I heard was correct. I walked out feeling confident, prepared and satisfied that I had made a wise investment. Jack taught me in four hours what I hadn’t figured out in months of doing it on my own.”

Cody Downs, Operations Supervisor for PowerWash.com, also attended Jack’s New Orleans class because he wanted to learn more about residential cleaning, and especially roof cleaning. “When I told Michael (Hinderliter) I wanted to take a class in New Orleans, he asked who was teaching it. When I explained it was Jack Kramer, Michael said I definitely needed to participate.”

Cody had gained most of his training through the staff at PowerWash.com, and was pleased to find out that he had been taught well.

“Jack’s class gave me new confidence in doing my job and helping our customers. I realized that I already knew most of the information that was taught during the introductory portion of the course. However, it has taken me about 1.5 years to learn the things that Jack taught in just a couple of hours. And I picked up some great tips as well that will make me a better distributor in the long run.”

“We clean approximately 200 roofs per year, and have cleaned and sealed hundreds of decks, including over 150 decks in a single condominium complex,” he explained. While most of the decks in his area are pressure treated pine or cedar, he has restored many hardwood decks as well. It’s Jack’s 14 years of professional cleaning expertise – combined with his experience as a professional trainer – that makes his pre-seminar class such an excellent opportunity, particularly for those who are new to pressure washing or wood restoration. The comprehensive class covers many topics, and runs from 8 to 6 on the first day.

“Jack held my attention the entire time, and that is saying a lot with me,” Downs explained.

“Jack is a very good instructor. He’s engaging and knows how to keep the drier subjects interesting. I picked up several useful tips at his class last year in Bethlehem, Pennsylvania.”

The first portion of Jack’s class is business basics and shows you how and why to create a business plan. “Without a business plan you have no direction or goals,” he explained.

The class also covers equipment – including pressure washers (both hot and cold), GPM, PSI unloaders, guns, hoses, nozzles, chemical applicators, tanks, and much more so everyone understands what equipment they will need.

The house wash section covers how to wash a house efficiently, how to identify possible issues, as well as cleaner mixtures. It also covers how the different surfaces such as vinyl, brick, etc., differ in their cleaning process. In the roof cleaning portion, students are taught how to clean roofs properly without damaging them. He provides students with documentation from national roofing authorities supporting this method. Jack also offers a wood restoration class, which can be taken along with the pressure washing class, or individually for those who already know the basics of pressure washing.

At the end of the class, Jack provides attendees with all of his contact information, and intends for them to contact him. In some cases, he may be able to do even more than simply help by phone. For instance, not only did Jack teach Melasseca in the classroom, he traveled over two hours away to help him on a deck restoration job.

“Jack is a guy who really cares. He’s not only a teacher, he’s a mentor, and I’m proud to call him my friend.”

“To learn from Jack was an amazing experience,” Cody added. “In fact, I was so blown away that before I left I had to give him a big hug – and I’m generally not a hugger.”

Jack’s son, Kyle, also helps with every class and participants agreed that he was a great addition to every class. “Kyle helped demonstrate and reiterate the points that Jack was making, and he did an excelleng job,” Scott explained.

Jack’s next classes will take place March 3-4 in Bethlehem, Pennsylvania, as a pre-seminar to the 2016 Pressure Washing Seminar and Networking Event. Once again, the event will be hosted by Jack Kramer, along with Tom Vogel of ACR Products and Thad Eckhoff, co-founder of the Pressure Washing Resource Association (PWRA).

The knowledge and experience of these three gentlemen, when combined, makes this regional event one of the most dynamic weekends of the year. The weekend will be filled with seminars, breakout sessions, vendors, and some of the best networking opportunities around.

“I like to run an event that really encourages contractors to meet other contractors as well as vendors,” Jack explained. “That’s why our event includes a networking reception, lunch and a delicious dinner buffet. With everyone sitting together and eating, it almost forces you to meet other like-minded professionals. I also try to introduce the students in my class to successful professionals that do the same type of work they are looking to do.”

To learn more about Jack’s classes or the Pressure Washing Seminar and Networking Event, visit www.PW-Seminar.com.