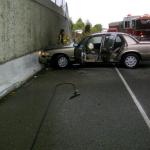 from the Fall 2011 issue of Pressure Cleaning Contractor Magazine
by Allison Hester, Editor/Publisher

Carlos, owner of New Look Power Wash in Fairfield, California, was driving home after cleaning a San Francisco hotel when he noticed traffic was stopping ahead. It was raining heavily, and he could see a car that was “obviously” facing the wrong direction. “I thought it was just a spinout, but as I got closer I noticed a woman standing next the car holding her arm,” he explains.

No one else had stopped to help, so Carlos pulled over. “The woman walked very fast towards me and obviously had an arm injury,” he explains. By then, some other drivers stopped to help. Carlos instructed the woman to go sit in one of other vehicles that had stopped to assist. He told another individual to call 9-1-1.

However, there was a bigger problem. “There was fire billowing out under the hood of her car and heavy black smoke was pouring out,” he explains. He looked at the car and determined he might be able to put the fire out with his pressure washer.

He asked several people to stop traffic so he could back his Landa trailer up to get it within 150 feet of the fire. “I handed the Landa key to a gentleman and gave him instructions on what I wanted him to do relating to turning the pressure washer on,” he says. “I put on a ladder-saver nozzle, as I figured this would be my best bet to knock the fire down,” Carlos explains. “As I proceeded to apply water to the fire, a small explosion took place under the hood. I continued to apply the water up next to the car and eventually put the fire out.”

Shortly thereafter, the California Highway Patrol and fire department arrived. Both were extremely thankful to Carlos’ quick thinking and bravery. Carlos says he always tries to keep extra water in his tanks for instances like this, and to help drivers whose vehicles have overheated and need water for their radiators.

Carlos’ heroic efforts serve as a great example of how everyday pressure washing contractors give back every day.