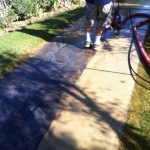 Why Pressure Washing Flat Surfaces Is an Essential Service

During this time of crisis, pressure washing companies are being questioned if we are considered an “essential service.” So, are we?

My answer is a 100% resounding YES. But you have to understand why, and in which circumstances it applies.

During this time of crisis, “essential services” consist of two types for our industry:

I can classify almost any flat hard surface cleaning so that it falls into the “Health and Safety” category. My pressure washing and restoration company, Eco-Friendly Power Washing, has been pressure washing in the name of health and safety for 20 years. In fact, it was an insurance company that first wanted us to put the wording “health and safety” into one of our contracts! Because of that wording, their client got a discount on their insurance premium that more than paid for our monthly services that cost them $2500 a month. But it wasn’t just a way to help them get a discount on their insurance. We were, indeed, cleaning for health and safety.

Let’s look at this a little deeper.

Why Should Pressure Washing  Flat Surfaces Be Considered “Health and Safety?”

Every time you put pressurized water or you soft wash a flat surface to get rid of organic staining or surface contaminants, there are two (2) actions that take place:

Now, let’s completely disregard #1 — i.e., cosmetic cleaning. We don’t focus on that. Cosmetic cleaning is not a term applicable to our industry in my opinion.  Almost every cleaning of flat, walkable surfaces should be considered health and safety cleaning because you improve the COF during the process.

So, let’s focus on #2.  If the surface contains dirt, dust, sands, oils, mold, mildew, algae, food grease, sodas, grime, calcium, calcium carbonate, or calcite, what happens?  It will, on some level, become more slippery than if the concrete didn’t have these stains.  This is the COF.  Under the Americans with Disabilities Act, the COF of walkable surfaces needs to be above .05 SCOF (Static Coefficient of Friction).  The DCOF (Dynamic Coefficient of Friction) should be a minimum of 0.42. This is verifiable with measurements taken with a Tribometer, primarily the BOT3000E, that insurance companies use to measure concrete when a slip and fall happens.

When someone slips, trips and falls at a person’s home, outside a store, or on a sidewalk, one of the most common questions is “who’s responsible?” In most cases, it’s the property owner.

Premises liability is the legal responsibility that property owners have for injuries that occur on their property due to slip and fall accidents. If a person slips, trips, or falls as a result of a dangerous or hazardous condition – such as slippery concrete – the property owner may be fully responsible. In general, property owners are held accountable for falls that result from slippery walkable areas.

How Is Slip Resistance Measured?

Slip resistance is generally measured by defining the Coefficient of Friction (COF) between two surfaces. An example is the relationship between a shoe and a floor surface.

There are two COF measures under the American Disability Act: Static and Dynamic. Let’s look at these closer.

So, when the surfaces are completely free of these contaminants, the surface becomes more slip resistant, which leads to fewer slip and fall hazards — every time! By cleaning concrete and exterior walkable surfaces in the nature of Health and Safety, you increase the COF of the concrete.

By cleaning concrete and exterior walkable surfaces in the nature of Health and Safety, you increase the COF of the concrete.  By increasing the COF level of that surface, you decrease the slip and fall risk.  If the traction level (COF) of the concrete is not up to ADA Standards, the homeowner or property owner can be held responsible for injuries under Premises Liability.

Current evidence suggests that COVID-19 may remain viable for hours to days depending on the surface. The best practice measure for prevention of COVID-19 and other viral respiratory illnesses in households and community settings is cleaning visibly dirty surfaces, followed by disinfection.

For soft, porous surfaces such as carpeted floor, rugs, and drapes, the CDC recommends removing visible contamination if present, then cleaning with appropriate cleaners indicated for use on the surfaces. After the porous surfaces are cleaned, the EPA recommends using products approved for disinfecting SARVS-CoV-2 and that are suitable for porous surfaces.

As pressure washing contractors, we are doing the same thing for other porous surfaces, such as concrete. We are first cleaning the surface, then applying a CDC-recommended and EPA-approved disinfectant.

Understanding why we are essential can go a long ways to not only helping the industry continue to work during this unprecedented time, but also to allow us to join in the fight against spreading COVID-19.

To help with the effort, I’ve sent a letter to Health and Human Services Secretary Azar. You can read the entire letter here, and I’m including the primary point of the letter below. As I wrote:

During this unprecedented time of crisis, Power Washing/Pressure Washing Companies are needed more than ever.  We cannot let our exterior walkable surfaces of homes and commercial properties become unclean, unkept and unsanitized.  If so, accumulations of human feces, bird feces, oils, mold, mildew, algae, dirt, dust, debris, allergens, sand particles, food grease, sodas, grime, calcium, spit, vomit and now, COVID-19, can build up, become a slip and fall hazard, or quite possibly the COVID-19 could be tracked inside commercial buildings/homes to be spread much more easily.

By cleaning concrete and exterior walkable surfaces in the nature of Health and Safety, we increase the COF of the concrete.  By increasing the COF level of that surface, we decrease the slip and fall risk.  If the traction level (COF) of the concrete is not up to ADA Standards, the homeowner or property owner can be held responsible for injuries under Premises Liability.  After cleaning, the Disinfecting or Sanitizing process can happen by spraying EPA Registered Products that are suitable for the surface just cleaned.

Please help me help our Contractors reduce the spread of COVID-19 and reduce the risk of infecting others.  If I could get, on your company letterhead, an approval that Health and Safety Pressure Washing Companies who use EPA Registered Disinfectant Products may keep working at this time, I think this would be a great step toward reducing the overall risk profile of COVID-19 and  help keep our slip and fall risks low.

A Final Call to Action

It’s time for us as pressure washing companies to realize our value, think out of the box, and become who we were meant to be. We are a very important part of the cleaning chain and we literally save lives every day by the cleaning that we do!

About the Author: Craig Harrison is a Veteran Hard Surface Restoration Contractor. He is the President of Eco-Friendly Power Washing, Inc. and President of Front 9 Restoration Inc. Craig is the inventor of F9 Products, Processes and the F9 Cookbook, which is available through a 3 pound fully laminated book with full color before and after pages. It is also available as a mobile App in the Google Play and Apple Stores.

Throughout his 28 years in pressure washing, Craig discovered systems that could simplify stains into one of four Processes. This made restoration easy! His Products, F9 Double Eagle, F9 Efflo, F9 BARC and F9 Groundskeeper were developed to clean over 140 different stains using one of these four Processes. From 1998 to 2008, Craig hired chemists to help him streamline his four products to work faster with safety in mind. Recently, Craig wrote the 100 page F9 Cookbook to tie all of these processes together, forever simplifying the art of Hard Surface Restoration.  You can join the F9 Restoration Professionals Facebook Group here.