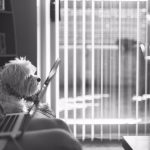 Bring Your Dog To Work Day is on Friday, June 21. The day is a nationwide event that raises money for charities dedicated to making a difference to the welfare of dogs. With 26% of the UK owning a dog*, chances are you’ll find one near your desk.

According to SMC Premier, contract cleaners who surveyed over 5,000 UK office workers, 16% love the idea of having an office pet. This increased with 18 to 24-year olds, with 26% thinking that a four-legged friend running around is a fantastic idea.

Not everyone is going to be happy to be greeted by a wagging tail, however. While the thought of having a pet in the office is cute and can boost morale amongst employees, not all office workers feels the same. In fact, 77% of those surveyed actively believe having a dog in the office is unhygienic.  The over 65 group felt even more strongly about this, with a staggering 85% thinking it’s unclean.

Rather drastically, 2% of those surveyed have actually considered leaving work because of it. So it’s a good thing Bring Your Dog To Work Day only happens once a year!

Oliver Byrne, Operations Director at SMC Premier said: ‘Although dogs may be the nation’s favorite pet, our survey shows not everyone feels the same. Our advice to employers are to check that all staff are happy with having dogs in the office before the day. One percent of the people we surveyed were actually allergic to our furry friends – so don’t assume your office will greet the dogs with open paws.”