Careful when asking for “Likes” on your Facebook page 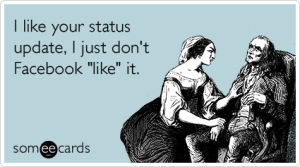 In this issue of eClean Magazine, we have an article on how to grow your Facebook page. One of the things mentioned was to actually ask for “likes,” “shares,” and “comments.” This has been a well-known and popular strategy.

However, according to an article on Entrepreneur.com released a few days ago, Facebook just announced that it is going to start frowning upon – and even penalizing — these kinds of blatant requests for likes. It’s part of Facebook’s new war on spam.

One of the things that qualifies as spam is what is called “like-baiting,” which is when you explicitly ask your fans to like, share or comment in order to get more distribution than you would naturally get without it. I would just suggest being careful when you do this and only use this method strategically when you have something really worth sharing (such as a special you’re offering, etc.).

In addition to like-baiting Facebook is frowning upon a couple of other things:

1. “Frequently Shared Content” – i.e., reusing the same photos/content over and over again.

2. Spammy links – i.e., links that say they refer to one thing but actually link to sometthing different. Facebook defines this as “inaccurate language or formatting to try and trick people into clicking through to a website that contains only ads or a combination of frequently circulated content and ads.”

According to Facebook, any “regular offender” will likely have their post distribution numbers decrease over the next few months. Those who don’t spam may actually see their distribution increase.