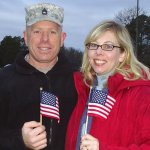 by Allison Hester, Editor of eClean Magazine (written in 2011)

My husband, Michael, has spent two of the past four Memorial Days in year-long deployments, first to Iraq in 2008 then in Afghanistan in 2010. So I naturally thought this holiday weekend would be important to him. It is to me.

I remember how much it hit home last year that MY husband was one of the soldiers our nation was honoring on Memorial Day. Not so. “I really do not want to go to church tomorrow,” he confessed last night as we were driving home from dinner. With a little prying, he continued. “They are going to make a big to-do about Memorial Day. They will recognize those who’ve served. I don’t want to have to stand up. I don’t want to have to think about it. I just want it to go away.”

As I prodded further, I began to understand. Mike said he didn’t need a special day to remember the guys who had died in Afghanistan while he was there. He thought about them every day. Mike remembered his contractor friend who he’d laughed at during lunch for piling on the ice cream, then learned the man had had been blown up by an IED later that same day. Mike remembered having to build the podium so a service could be held for the first two soldiers killed on his FOB shortly after he arrived. They were not in his unit, nor was anyone who was killed, and they may not have been best friends, but he knew them and he remembered them. And most of all, they affected him.

I admit I was caught off guard. When Mike had told me about people getting killed, he always had a somewhat nonchalant “that’s just how it goes” attitude. At least that’s what he portrayed. I guess I didn’t remember that deep down, my often unemotional husband is indeed human.

So we are not “celebrating” Memorial Day in our household. We are not putting flags up in the yard. We’re not watching war shows and movies on TV. We will not partake in parades or concerts or anything else celebrating those who have served. Because that’s what MY soldier wants, and that’s how I will honor him this weekend.

Mike may be alone. He may be the only soldier out there who is angered by “Welcome Home” banners, or is hurt when he sees rows of U.S. Flags. I confess I don’t really understand it, but I also don’t understand what he’s lived through the past two out of three years.

And so, with this in mind, I ask all of us to honor our soldiers however they wish to be honored. To be respectful. To be patient. To be understanding.

That’s how we can let them know how much we appreciate their sacrifice.