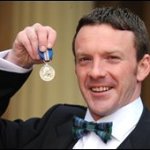 In 2007, Scottish baggage handler John Smeaton became an international hero after stopping a Glasgow airport bomb by taking on two terrorists when they drove a Jeep filled withe fuel and gas canisters at the terminal building. Smeaton was even awarded a gallantry medal from the Queen.

Today, Smeaton is working as a carpet cleaner in the Bronx district of New York after emigrating with his American wife Christy. “I’m happy as long as I’m doing an honest day’s work,” he said.