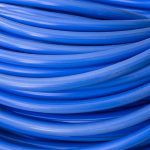 (From the May 2015 Issue of eClean Magazine)

Last fall, our readers named hose reels as one of their top five favorite accessories, and for good reason. Hose reels are designed to keep long lengths of hoses neatly and safely out of the way between jobs. They save the downtime of untangling or loading loose hose. They prolong the life of hose by helping prevent kinks and nicks. And they help prevent injuries from technicians – or pedestrians – tripping over piles of loose hose.

“Hose reels are definitely worth the investment, as they save both time and energy,” said Jeff Hochman of Pro-Pressure Cleaning, Inc., in Boynton Beach, Florida. Hochman adds that his two Hosetract low profile reels with super swivels have “lasted 15 years.”

However, hose reels are not without their critics.

Responses to a recent eClean survey about hose reels revealed that for the majority of cleaning contractors, hose reels are a valued necessity. For some, they’re a necessary evil. But for a few, they are more hassle than they’re worth: “Annoying.” “A pain.” Disappointing.” “Not worth the hassle.”

In this article, we will take a look at the most common dislikes about working with hose reels, and offer some ideas on how contractors have managed to resolve those issues.

The Problems (and Solutions)

As contractors take on different types of cleaning and/or bigger jobs, most require the use of multiple hoses and reels in their setup. Every reel takes up room, which can be a problem.

“All of my setups are in box trucks or enclosed trailers, so the size and footprint of a hose reel always goes into consideration when purchasing a new one or setting up a new truck,” explained James Pasternak of NorthEast Powerwashing LLC in Marlborough, Connecticut.

Frank Hall of Jetstream Pressure Washing of West Central Florida said he prefers a small setup, which is part of the reason he doesn’t use hose reels. “I’m able to carry over 300 feet of pressure hose, 175 feet of 5/8″ chemical hose, and approximately 350 feet of water hose in a 5 by 8 open trailer. I use the 225 gallon water tank to store most of the water hose. I use just about every square inch available on my set-up. No hose reels allowed!” That said, Hall added that he knows he’s “an exception,” not the norm. “If I were to go to a flatbed setup or different trailer configuration, I’d probably have to suck it up and get hose reels. I’d get Titan stainless if I had to, as I’ve seen SH destroy too many of my peers’ hose reels.”

Those who do use hose reels – and most contractors do – have come up with various ways to work with space issues. “We sell a lot of stackable reels as they help provide better space usage,” Tracy Handl of North American Pressure Wash Outlet explained.

In addition to stackable reels, contractors have built shelves, mounted reels above the trailers, mounted reels on the fenders, and even hung them upside down in order to save space.

“When your hose is on a reel, your trailer needs to be backed up to the direction you want to string it. That’s not always possible,” said Sheila Smeltzer, owner of A+ Pro Services, Inc. in Shallotte, NC. Instead, Smeltzer says her team rolls their hoses on the ground and hangs them in their van or trucks. “Also, we like to use different hose lengths per job need. That way we can grab the hose length we need and go.”

Several contractors have found ways to work around this issue. Frank Franzoi of Hydroclean in Durand, Michigan, for example, said he has his hose reels on a swivel “so I have 90-degree use. I can pull straight back or have my truck on the left side.”

Don Reeves of 7580 Pressure Washing in Edna, Texas, built brackets that allowed him to mount the actual reels to angle iron. “The angle iron was welded to a 2-inch pipe and the pipe fits inside a 2.5-inch pipe. This way I have a swivel that will lock into any position with a set bolt. This assembly is welded on the front of my trailer, one on each side. This makes deploying and retrieving the hose easy.”

For residential work, Michael Hinderliter of PowerWash.com recommends mounting the hose reel on the right side of the trailer. “You’re going to be pulling up curbside, and you want to be able to roll that hose out toward the facility then rolling it back up when you’re finished. You don’t  want to have to run it in the street and around your vehicle.” For commercial work, he recommends mounting off the back of the trailer as the vehicle will likely have to be moved over the course of he job.

The Problem(s) of Construction Failure

By far, most of the complaints about hose reels

had to do with construction issues. These include the following (among others):

Powder coated reels are generally the most popular option for contract cleaners, largely due to their lower price. However, the quality of powder coating can vary from manufacturer to manufacturer, and sometimes even from reel to reel. Too much coating will cause it to flake off. Too little and the metal won’t be properly coated.

The preparation of the reel before coating is extremely important, and a sensitive process. “Before powder coating painting, our reels go through a phosphatizing step that cleans grease and oils from the surface to be painted, which allows the paint powder to adhere to the surface while it is running through the bake oven,” explained Carl Harry, general manager for Steel Eagle. “Any debris or oil left on the metal will allow the paint to flake or chip.” When done correctly, powder coat paint is very durable.

However, while coated and/or painted reels work well in many situations, the more corrosive the chemicals you run through your reel or the more harsh the environment you work in, the more potential there is for coating failure. While more expensive, a lot of contractors have elected to go with all stainless steel reels – and the survey indicates overall it’s been a smart choice.

The most common problem associated with hose reels is swivel failure. A swivel needs to be able to maintain a tight seal while rotating under pressure. Throw in corrosive chemicals, and it’s no wonder contractors run into problems. That’s why choosing a swivel that is rated properly, can handle the chemicals you use, and is repairable is going to be imperative.

While more expensive, a number of contractors have switched to more expensive stainless steel options – such as the Super Swivel and Mosmatic swivel – and had quite a bit of success.

“The Super Swivel has proven the test of time to be one of the best quality swivels on the market, and it also has a repair kit that can be installed if the customer desires to rebuild the swivel versus replacing it,” Harry explains. While Steel Eagle almost exclusively uses the Super Swivel, Harry adds that they have also successfully started offering the Mosmatic stainless steel swivel on some of their models.

“I’ve tried a number of swivels, and by far my favorite is the Mosmatic stainless steel. I found they have lasted me the longest and I have switched most of all my swivels out with the Mosmatic. That way I only have to buy one set of rebuild kits for all my swivels,” added Pasternak.

Another important aspect of swivels is that they need to be rated at least 1000 psi higher than your machine. That is so when your pressure washer spikes, your swivel can handle the added pressure. Additionally, if you’re using hot water, the swivel need to be rated to handle that as well.

“The swivel must be able to handle the temperature without it affecting the seals, which could cause the swivel to leak,” Harry explained. Steel Eagle’s reels are rated at 325 degrees F, which is important if you are using this on a steam cleaner that runs 300 F, versus a hot high pressure washer that may run 200 F.

So, Which Reel Is Best?

When surveying readers about which reel is best, there really was no clear answer. Brands that received high marks from some received at least a few low marks from others.

What was clear, however, was that you tend to get out of a reel what you put into it. Those who spent more on stainless steel reels with high- quality swivels were definitely more satisfied with their reels than those who went for less expensive options.

When asked about rewind systems, a few had used electric systems and loved them. Most, however, stated that they preferred hand cranks (although admittedly, most had not used electric). The reasons for hand cranks varied from less expensive, to less that can break down, to a good way to get some exercise.

“I use a hand crank, because it gives me more control on how the windup process progresses,” said Reeves. “I can stop quickly if the hose gets in a bind or the roll is not level when winding.”

Extending the Life of Your Reel

While it’s imperative to buy a hose reel that will fit your equipment and the cleaning environment in which it will be used, you also need to take care of the reel.

First, “you should unroll the entire hose off your reel for each job, which makes it easier on your hose when doing your job, whether using a pressure washer or low pressure pump,” said Steve Babcock, Soft Wash Wizard, Harrisburg, North Carolina.

It’s important to unroll the entire hose off the reel to prevent what is sometimes called the”boa constrictor” effect – i.e. the pressurized hose still coiled on the reel squeezes the center of the reel and potentially crushes the reel. “We sometimes have to straighten out drums when folks don’t fully unroll the hose before turning machine on and then crushing the drum,” Handl added.

Second, you should always flush your hose and reel after using chemicals. “The flushing of the chemicals from inside the reel will help prolong the axle life of reels running corrosive chemicals through them also,” Harry explained.

Third, when temperatures fall before freezing, you need to winterize your hose reel. “Leaving water in there and allowing it to freeze can cause irreversible damage to the plumbing parts of the reel,” explained Pasternak.

To sum it up, Franzoi provided this important reminder. “You can go big and expensive or cheap and small. Either way you go, if you do not maintain your equipment, you will have a failure at the worst possible time — usually on the job with no spare parts. Take the time to do your maintenance and you never have an issue at the worst possible.”