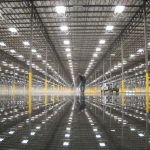 (From the January 2013 Issue of eClean Magazine)

James Lewis, Underpressure Powerwashers, Inc., is no stranger to taking on unusual projects both indoors and out. Living in Oak Hills, California, near the heart of Hollywood, Lewis has been called to clean up a number of television sets, like the Top Gear warehouse project shown on this month’s cover. (See bottom of the page to learn more about his unique project.)

But he does a number of “normal” interior projects as well, such as warehouses, auto garage and transmission shop floors, mechanics’ bays at the big box stores, as well as restaurant kitchens and dining room floors.

“I know a lot of guys in the cleaning industry who won’t take their work inside. It’s too intimidating,” he said. “However, if they would take the task on, they’d probably find it’s easier than they expect …and it will open doors for all kinds of new projects.”

Pressure washing indoors does present some unique challenges, but it also can be quite lucrative, particularly since many contractors don’t offer these services. The keys are to choose jobs wisely, invest in proper equipment, utilize smart cleaning practices, and price to make a profit.

Here are some specifics to consider when cleaning inside:

Can the job be done safely?

The first thing Lewis looks at when considering an interior job is how hard it will be to clean the area without causing damage. “We get some pretty crazy requests, and those we will turn down,” he explained. “But if it is a fairly straightforward project, we’re not afraid to tackle it.”

One of the biggest obstacles to cleaning inside is working around electrical outlets, wiring and lighting, because obviously water and electricity do not mix. Jobs that require cleaning ceilings and walls, in particular, call for extra precautions.

“When asked to clean the ceiling of a warehouse, we use a lift and cover all the lights with plastic, then tape everything up watertight and cut off the power,” explained Matthew Pate of Extreme Clean Pressure Washing in Johnson City, Tennessee, who has experience doing several warehouse cleanings, tile and grout cleanings for commercial properties, walk-in coolers as well as some commercial garages. “We will then perform the cleaning using large lights that we run off our generator or extension cords to another section where the power is still on. We wait until the next day or so to remove the protective covers on all the light fixtures, switches, outlets and any other item that we might have covered, then fine clean those areas by hand.”

However, even with these types of precautions, problems can arise. This was something Lewis learned the hard way when cleaning a Vertec garbage transfer station. Despite covering all electrical outlets, etc., water somehow, somewhere got into the electrical system and shut the plant down. Lewis had to “make the embarrassing phone call in the middle of the night” to let the plant manager know what had happened, then pay for an electrician to make an emergency call – on a holiday, no less. “They (the client) weren’t happy, but they got over it because we did a great job …and we still managed to make a profit.”

Lewis has since cleaned that station again, but avoided the area where he believes the electrical problem originated.

However, electricity is not the only problem inside jobs can present. Ideally, the facility managers will have any products or machines covered or moved prior to the cleaning, but if not, contractors need to take precautions.

Then there are the unique situations. For example, Daniel Simmons of Pressure Washing America, LLC, in Houston, Tex., was recently hired to clean a refrigerated warehouse where the refrigerant used contained ammonia, so no bleach could touch it.

For Lewis, an enclosed parking garage at an upscale shopping mall presented an unexpected problem when the water from the floor they were cleaning leaked through tiny cracks and poured onto the expensive cars parked below. Situations like these require some extra know-how in order to effectively complete the job. They may also require extra safety equipment – such as respirators – due to chemical fumes inside.

Speaking of fumes, there’s the issue of carbon monoxide. Many contractors run their equipment outside, using long hoses to reach the interior. However, some jobs and contractors work better by bringing the equipment indoors, which can be dangerous if not handled properly. It can also cause problems with carbon monoxide metering devices.

Lewis said that prior to cleaning the enclosed parking garage, a friend warned him that a lot of garages have carbon monoxide metering devices. “If too much carbon monoxide is in the air, they will kick on fans. Green is ok. Yellow kicks off the fans. Red kicks off fans and alarms, which also notifies emergency services,” he explained. “So we make sure the alarms are off, because we are going to make some carbon monoxide. The fans still work. We are also trained to recognize how to sense if the carbon monoxide is causing problems and if so, we’ll shut down the rigs.” He also makes sure there is plenty of ventilation any time his equipment runs indoors.

How much time is allotted for cleaning?

One of the biggest issues that interior jobs present is that of time constraints. For instance, with the refrigerated warehouse job, Simmons not only had a massive 860-linear foot, four story building to clean, he had a short window to do it in. “The warehouse is open almost 24 hours a day, every day. The only time it’s closed is between 10 p.m. Saturday to 8 a.m. Sunday. So that was when we had to go out there,” he explained.

The maintenance manager, fortunately, recognized the challenges and told Simmons to put a four-man crew together and get as much done as possible. “I’m glad we charged by the hour rather than the square foot. That saved us a lot of stress.”

Pate, too, mentioned that “how long of a time frame we are allowed to be on property to perform our cleaning services” plays a big role in how he prices a job.
However, there are also instances where the work can be done quickly. For instance, Underpressure offers kitchen exhaust cleaning and has started washing the kitchens and dining areas in some of their restaurants. “We can clean the kitchen floors in 15 minutes,” said Lewis. “They look great when we’re done, it pays well, and the clients are thrilled.”

How clean is “clean?”

For the refrigerated warehouse, Simmons’ client recognized that the walls were covered in a quarter-inch of black “gunk” that was going to be very difficult to remove – particularly given some of the job’s limitations. For instance, the internal temperature for the warehouse was only 38 degrees, causing the chemicals to react slower than they would in warmer conditions. And as mentioned earlier, cleaning products had to not conflict with the ammonia in the refrigerant. In this case, the client wanted them to just do what they could.

Lewis’ garbage transfer station job required removing layers of dust and grime from the building’s ceilings and walls, which were so thickly covered that the outside light could not shine in. However, the client had no concerns about where the water went because the floors were simply covered with huge piles of garbage that would eventually be taken to a landfill.

What equipment is needed?

One of the biggest issues to consider when cleaning inside a building is what to do with the water. While it won’t take care of 100 percent of the water, one of the most popular options is to use a surface cleaner with a vacuum recovery system.

Lewis, for instance, was “so impressed with Hydro Tek’s Hydro Loop system that all our trailers are equipped with that system. When they upgraded the machine, we upgraded what we had to keep up with their technology, and they get better and better and better.”

Pate, on the other hand, has two hot water machines, and a complete Sirocco reclaim system that reclaims all the wastewater as they are cleaning. “If you don’t have a recovery machine, doing a large warehouse is not impossible to perform; however, you will have to check to make sure the drains in the floor are not clogged, or some higher than others causing other parts of the warehouse to flood,” he added.

Getting the water off the floor is a big issue, and if reclaim equipment is not being used, it’s important to know how to get the water from point A to point B despite obstacles. “When discharging down the drain, be sure to contact your local wastewater department first to get the wastewater requirements that must be performed before discharge,” warns Pate.

There are also areas, such as corners and around small obstacles, where you may have to clean without a surface cleaner, and it’s important to note those and prepare ahead of time. Floor scrubbers are a nice addition, whether you purchase, rent, or possibly borrow from the facility being cleaned.
For reaching high areas, lifts are generally a must. The facility may have them on site and allow you to use them. However, you still may have to come up with other solutions, such as extension wands.

How much to charge?

Pate says you should consider all of the following before pricing an interior job:
• How long you have to clean
• The size of the area to be cleaned
• What has to be removed in order to clean
• Walls cleaned? Ceilings cleaned?
• What is stored in the facility?
• Obstacles that may cause issues
• Chemicals used
• Fuel Prices
• Labor

Finally, look for extra opportunities while you are there. For example, Pate’s most difficult interior job required cleaning over 300,000 square feet to prepare for a coating to be applied. “They needed us to remove tire marks, but these were silicone and very thick. We were able to remove most of the tire markings. The coatings contractors were very pleased when they came in to inspect.” Since that time, Pate has been working closely with David Phillips of Southern Stain and Seal to learn the process of floor coatings “since we left a large amount of money on the table by just cleaning and not sealing.”

Again, Lewis encourages contractors to consider taking on interior cleaning. “Don’t be afraid. Understand you’re going to produce some water – that’s just part of it. Get a vacuum recovery system to get it. Cover your bases. It will get you a lot more work in the long run.”

About the Photo Cover 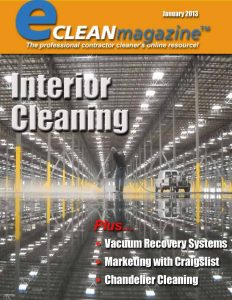 Jim Lewis received a phone call asking if he cleaned warehouse interiors. He was then asked to show up at a certain address for what he believed was going to be a 500×100 foot warehouse. When he arrived, he realized the facility was much larger, but the customer only needed a portion cleaned.

Upon entering the facility, the customer asked him to be very quiet because they were filming. It turned out to be the TV show Top Gear, a program where they compare different vehicles. In this particular episode, Tanner Foust – the famous race car and stunt car driver – was testing four exotic cars – “some that weren’t even on the market yet” – to compare their acceleration and braking capabilities inside the warehouse.

“The mess we had to clean up was the gunk they put on the floor near the braking area to make sure they didn’t go through the wall,” he explained. “It was corn syrup. They really stuck to it. But they tracked it everywhere. So we did the 500 feet section, about 200 feet wide. rinsed with hot water, and vacuumed out of the warehouse.”