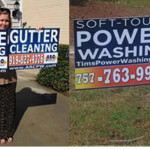 An Interview with Tim Fields of Signs2Day

Yard signs are a simple yet powerfully effective marketing tool for service industry contractors – when they are correctly designed and utilized. Otherwise, they are simply a waste of money.

For Tim Fields – who has been around the cleaning industry since the 1970s, and who, along with his son, has owned Complete Power Wash, LLC in Hagerstown, Maryland, since 2008 – yard signs have been an integral part of his business for almost 20 years.

“When I worked in the construction trades, signs were a very real part of my early sales success,” Fields explained. “Those signs were 36×24 inches, two color vinyl on a metal sign blank with a 1-inch metal iron frame. They cost about $80 a piece – but they lasted for months – and they worked.”

Moving into the pressure washing business, there was no need for that heavy-duty or expensive of a sign, so Fields went the opposite direction – a $5 screen print on coroplast.

“We used them for years and tried several different designs. They all performed poorly.” As a small business owner married to an accountant, Fields measures everything. He knew he received almost no response from his signs. “Sure they were cheap. But what was the point?”

Fields then turned to his local sign guy for full-color signs that cost $22 a piece, plus stakes, on 4 mil coroplast. While they did look better, they didn’t perform any better. “Almost $250 for 10 signs. They were definitely more attractive, but were still a waste of money.”
Early last year, Fields took a different route. He contacted a graphic artist and asked her to come up with new type of design.

“I wanted a yard sign that was bold and eye catching, that featured a service, that did not headline the logo, and that could take advantage of the new, lower cost, full color printing systems.”

He also wanted them to be “Ferrari friendly” – meaning that even a sports car traveling at road speed would be able to see the sign and know what service they were offering. “And just as quickly, I wanted them to know that there was something different about the company behind the sign.”

After a little bit of back and forth with the designer, a new sign was developed.

Soon after launching his new signs, Fields was able to track that one of his first signs produced seven separate jobs, totaling almost $4,000 so far.

Fields shared his signs and his successes on RoofCleaningForums.com. A fellow roof cleaner asked if he could borrow the design and have some of his own signs made. “He posted the results a few weeks later and they were lacking in many respects. He had gone local, which in many cases is a wise thing to do, but the signs were a very poorly done copy and were very high priced. I knew that there was something better out there.”

Fields and his brother both worked around the sign industry for over 25 years. Using his contacts from many years of exposure to the sign industry, Fields began laying the foundation for a new business venture. “The folks in the service trades that depend on a steady flow of new customers can really benefit from correctly-done yard signs,” he explained. “They just needed a reliable and affordable way to do that. It was a need waiting to be filled, and that’s why I started Sign2Day.com.”

When I asked Fields what makes an effective yard sign, he gave the following real world example:

Tim Wagner of Wagner Window Cleaning in Upton, Mass., had his first yard sign printed by Vistaprint, and it featured his logo, phone number and website. Over the course of six months, Wagner did not receive a single call off that sign. (See before photo below.)

Wagner saw one of Fields’ gutter cleaning signs online and it piqued his interest. “It was simple yet vibrant, and right to the point.”

So Wagner decided to give Sign2Day.com a chance and ordered 10 yard signs to try out (below right). “I got two calls within the first few days, so I immediately ordered 10 more,” Wagner explained. “When those came in, I place one in my yard and went inside. Less than an hour later, someone called from that one. I actually had earned my money back from those signs before the charge reached my debit card.”

Unlike the many generic sign companies out there, Sign2Day.com is owned by a member of the professional cleaning industry, and their products are designed exclusively for similar service-industry markets. That is why Sign2Day has a number of unique things to offer, including:
• Adaptations of proven designs, created by a service company, for service companies. Tim Wagner’s example above is just one of many stories from contractors who are having tremendous responses – and making sales – because of the products from Sign2Day.com. “I offer a proven design that has generated calls for guys in as little as one hour from the time they receive their signs.”

• “Incredibly fast” turnaround. “We had one customer who posted pictures of their new signs 36 hours after placing the order,” Fields said. “Our turnaround time has been fantastic. We have had many orders on the East coast deliver within two days of placing the order. A recent customer in California approved his artwork on Thursday and had his signs in hand the following Monday.”

• Unique sizes and shapes. One recent customer reported that zoning officials did not grant him permission to place his new signs in certain areas because they were greater than one foot square. “Three days later, he had a batch of 12-x12-inch signs arrive at his doorstep. Sure, they were a bit small, but they were still blazingly visible and no one else in his service area advertises in this manner.”

• Additional products, such as decals. “A cleaning contractor recently asked if he could have some stickers made with his logo. Most sign guys will tell you to buy stickers at Wal-mart and print them off yourself. We, however, set our team into motion and had self-adhesive, custom graphics printed on vinyl with durable plastic laminate over them available on our webstore within three days of his request.” The decals are custom produced with the customer’s information and are made from the same material used for creating wraps on box trucks or graphics on dirt track race cars. “It’s pretty tough stuff.”

• Extremely Competitive Prices. “Many of the guys in the business – myself included – want to sell our time and services for top dollar, but shop for the best prices when it comes to buying products and services,” Fields explained. “Our prices are extremely competitive – to the point that they are just plain hard to beat.”

• A commitment to top-quality service. “I realize the true test of a service provider is not always the initial delivery, but how issues are handled when they arise,” Fields explained. “We haven’t had any issues arise yet – and I hope that we don’t – but we ask our customers to notify us right away of any adjustments needed and we shall do everything reasonably within our power to make it right.”

• Discounts for Pressure Washing Resource Association (PWRA) and Window Cleaning Resource Association (WCRA) members. “I am a strong believer that being affiliated with the right groups of people – whether it is an online forum or a more formal organization, such as the PWRA and WCRA – can boost your business by helping you learn from those that have gone before you,” Fields added. “In addition to the very competitive prices we offer, we also have additional discount codes for some of the major groups.”