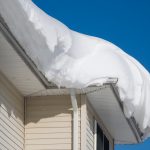 From Issue 39 of eClean Magazine

PWNA Board Member Matt Pierce of Pierce Property Services in Boston usually slows down his cleaning significantly in the winter, focusing instead on planning and preparing for the next year. But with last winter’s unprecedented snowfalls – over 104 inches of snow – he found himself facing a unique opportunity.

Not only did the snow keep falling, the temperatures remained low enough that it just wouldn’t melt. The media began reporting of roofs collapsing under the weight of the snow, especially after the roof of an ice skating rink collapsed, narrowly missing over 30 pee-wee hockey players. Matt had done a little bit of rooftop snow removal in the past and had the equipment already on hand, so he decided to try sending a simple email blast out to his commercial customers stating that he could help them with this service.

“We focused on commercial clients because their roofs are generally flat, which are safer,” he explained. The phones began ringing… and they didn’t stop. Not only did Pierce not have to lay off workers last winter, his gross profits went up by 500 percent over the previous winter.

Besides having the proper insurance, Matt also protects his company by having customers sign a damage liability waiver. “Although we only used plastic shovels, we won’t guarantee that there couldn’t be small punctures in the roof. We also don’t want to assume all liability for the roof come springtime when the snow melts.” Their goal is never to leave the roof completely clear of snow. “We try to clear it to about two to three inches of snow in order to not come close to the roof surface.”

Other things to keep in mind:

• Start by talking with the customer to find out what their objective is. What areas of the roof do they want cleared? Where do they want the snow to go? “Some clients may want walkways cleared to mechanicals. Others may want wind drifts. Others are mostly concerned with removing snow from the middle of the roof where weight is the biggest concern.”

• Safety is a priority and needs to be planned before starting. While Matt had offered snow removal services before, it had never been in the capacity as it was last winter. His team was able to apply a lot of the knowledge they already had from their other services to the process, especially how to properly use fall protection.

Disposing of snow from the roof is challenging because it requires individuals to approach the edge of the roof. So before starting, they assess the fall protection options that a building has and make sure everyone on the roof has access to fall restraint protection on at all times. They also placed roof perimeter caution tape 10 feet back from roof edge, as well as along the edge of the roof, and around all openings on the roof, such as skylights, dome lights, and roof hatches. Because the snow was often several feet high and covering items on the roof – like skylights, etc. – Pierce would use Google Earth to confirm with the client that what was shown in the pictures were up-to-date.

In addition to safety on the roof, there are also ground safety concerns. Matt stressed the importance of making sure the “drop zone” where the snow is getting thrown over the edge of the roof is securely roped off and that pedestrians are well protected at all times. “If it’s a busy area, it’s a good idea to have a ground spotter the entire time,” he added.

• Develop a system. For Matt’s team, once fall restraint was in place, they would create a “wheel barrel assembly line” where techs would fill wheel barrels full of snow. Then one individual would dump them over the edge of the roof at the designated drop zone. In some cases, they would also create a “snow blower launching pad.” He explained, “We would dump the snow on plywood 10 feet back from the edge and then launch the snow over the edge of the roof with the snow blower.”

• Have the right tools. Pierce said that his teams used the following:

• Caution Tape for the Roof

• Barricades and Caution Tape for the Drop Zone

• Set realistic goals. “It’s important to pace your crews,” he stressed. “We would set daily goals for the day. The jobs would be bid by time and materials with a ‘not to exceed’ number that the customer felt comfortable with.”

Publisher’s Note: This is part one of an article from Issue 39 of eClean Magazine entitled “There’s No Business Like Snow Business,” an educational article sponsored by the Power Washers of North America (PWNA). To learn more about the PWNA, visit www.PWNA.org.