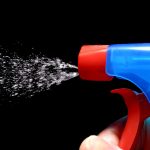 Last November, the University of Bergen in Norway released its findings from a 20-year scientific study on the impact of cleaning chemicals on lung function.

The study determined that the regular use of cleaning sprays containing chemicals such as bleach, hydrogen peroxide, and ammonia can cause as much damage to lung function as smoking 20 cigarettes per day.

The study followed over 6,000 participants – 3,298 women and 2,932 men – who were separated into three categories: those who were occupational cleaners, those who used cleaning products at least once a week in their homes, and those who rarely used cleaning products. The participants’ lung function was measured by the amount of air they could forcefully breathe out after breathing in. The study also controlled variables that could affect lung capacity, such as smoking.

In the end, occupational cleaners showed the highest amount of lung damage – including asthma. However, even those participants who used cleaning sprays to clean their homes at least once per week showed a marked increase of damage in their lung function compared to those who did not.

The study found that women were impacted more than men, but scientists also claimed that the discrepancy may have been due to the smaller number of men who participated.

The Norway study’s findings were similar to those of a September 2017 study in France that followed over 55,000 registered nurses for over eight years with no prior history of chronic obstructive pulmonary disease (COPD). The French study found that nurses who used disinfectants at least once a week to clean surfaces showed a 24 to 32 percent increased risk of developing COPD compared to those who did not.

The research adds to previously reported concerns about the presence of volatile organic compounds (VOCs) in cleaning products. These types of chemicals evaporate into the air when they are used, including acetone, benzene and formaldehyde. Best advice is to avoid breathing in too many VOCs on a regular basis.

Experts attribute the decline in lung function to the damage cleaning agents cause to mucous membranes lining the airways, resulting in persistent changes over time.

“The take-home message is that in the long run cleaning chemicals very likely cause rather substantial damage to your lungs,” said Co-Author Oistein Svanes