What is the Softwash Proportioner?

from Issue 44 of eClean Magazine 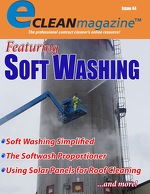 As a firefighter, Tim Aselton understands the need for speed and efficiency – something the traditional soft washing setups are not configured for – until now.

In 1994, Tim Aselton of Tallahassee, Florida, bought a pickup and a pressure washer and started cleaning to put himself through fire school. Two years later, he began working as a full-time firefighter, while continuing to run his pressure washing business on his days off.

By 2002 – following the advice of an industry friend – Tim switched from pressure washing to soft washing.

“My customers were not necessarily comfortable with the idea of using high pressure, so I transitioned away from my pressure washer to the use of a 110-volt pump for most applications,” he explained. However, while he was happy with the results that soft washing produced, he was not impressed by the process. “Every cleaning situation is different, so I don’t practice using ‘cookie cutter’ mixes when washing. I found it very frustrating having to create mixes ahead of time then guesstimate how much mix be needed at what ratio,” he explained.

In fact, he recalled a 100+-degree day when he had one of his employees on a roof and the mix ran out. “He was stuck up there in the heat waiting for me to make more. I figured there had to be a better process.”

Tim started looking for a solution that would allow him to work more efficiently, eliminate the need for pre-mixing, and stop wasting so much chemical. He researched other products on the market in other industries. While there were some items on the market that were similar to what he wanted, none of them worked well for the soft washing industry. As someone who has always been good at designing and building things, Tim decided to try creating something himself. It took a lot of trial and error, but Tim eventually came up with the basic Softwash Proportioner system and “realized it actually worked.”

Even after the basic concept was figured out, however, there were a lot of adjustments before he was satisfied. “It had to be leak proof. It had to be durable enough to handle bleach.” He pulled some parts from the industrial and agricultural markets, but there were some items he had to have custom manufactured. “The springs would rust out after just two to three months. I had to have those specially made.”

When Tim was not at the fire station, he was out testing adjustments. At one point, he took a leap and pulled his mix tank completely off his vehicle. “Not only did doing so give me more space and allow me to get a smaller truck, it gave me even more motivation to make this work.”

That was around the time that he ran into his industry friend and direct competitor Ramon Burke of Spray Wash Exterior Cleaning at their local supplier. “Tim told me he was working on something he thought was going to really change his business, but he wouldn’t show me what it was. It wasn’t ready yet,” Ramon explained. “I saw that he had something on his truck in a locked box, and I noticed he had a tank of water, a tank of bleach, but no mix tank.”

In fact, it took Tim about three years to become completely satisfied with his creation.

“It took time. I wasn’t going to settle if it didn’t hold up. I needed it to be bullet proof.”

“Tim is super particular about things,” added Ramon. “When he finally shared with me what he’d created, I saw what a game changer it really was.

Essentially, the patent pending Softwash Proportioner eliminates the need to create batch mixes for softwashing. The Proportioner is a small stainless steel box that has three inlets – one of bleach, one for water, and one for a surfactant – and one outlet. The operator designates the amount of chemical to be used by turning a valve, which can also be adjusted at any time. Then the chemical ratio is mixed in the Proportioner itself and comes out the single outlet valve, which is connected to the softwashing pump itself.

Proportioner Benefits As mentioned at the beginning of this article, Tim Aselton is a firefighter as well as the owner of Tim Aselton Softwashing. Tim knew that working more efficiently would make a huge difference in his own business, and it has. “I’m now able to run a full-time business on a part-time schedule,” he explained.

Specifically, here are the key benefits of using a Softwash Proportioner:

1. Time Savings: When Ramon first added Proportioners to two of his trucks, his crews came back much earlier than normal – so much so that he thought they had skimped on the job. “I actually got really mad and told them I expected better work from them,” he explained. In talking with his project manager afterward, however, he realized the Proportioner had just exponentially increased his crew’s efficiency.

“My project manager said it blew his mind watching how much faster and more efficiently they could work.”

Mixing a batch of chemical takes times. Mixing multiple batches at different ratios takes even more time. “One of our big projects is washing a group of townhomes
where we wash both the roofs and the siding, and the mixes are different,” said Tim. “When you’re cleaning 120 units at a time, it’s pretty inefficient to make one batch for the siding, then wash all the townhomes, then go back and wash all of the roofs at a different ratio. The Proportioner lets us adjust between the siding and the roof on the fly, and the time savings is phenomenal.”

2. Consistency. “I’ve found is that some employees are really good at making accurate mixes. Some are terrible,” said Tim. “The Proportioner fixes this. There’s no more guesswork.”

The Proportioner also allows the user to add or adjust a surfactant as needed. “This is really helpful if, for example, you have a steep roof and need to help it stick. And again, you can adjust as needed.” In fact, Tim, Ramon, and another industry friend, Patrick Clark of Precision Pro Wash, LLC, in South Carolina – have created a chart with suggested softwashing ratios that now comes standard with every Softwash Proportioner.

3. Bleach Savings. “There are a lot of owner/operators in this industry who may not care as much about time or consistency, but they do care about chemical costs,” said Ramon. “In this industry, bleach is everything,” agreed Tim. “When you make inaccurate mixes, or you make too much, it’s money. With the Proportioner, you don’t waste bleach. And because it mixes right in the Proportioner, the mix is always fresh.“

4. Space Savings. The Softwash Proportioner, as mentioned, eliminates the need for a separate mix tank. The Proportioner itself is small and easily mountable, so it takes up minimal space, which can mean the difference in the size of truck needed for carrying equipment.

Bringing It to Market

Tim’s sole purpose in designing the Softwash Proportioner was to help his own business become more efficient. But Ramon encouraged him to consider taking the product to market, realizing that “this was something that could really help a lot of people.”

The idea of helping other people – especially his fellow firemen/washers – appealed to Tim. Ramon helped Tim connect with Paul Kassander of the Power Wash Store. “I’ve known and trusted Paul for a long time, and felt like he would make a good partner for Tim,” Ramon explained. “Paul has been huge in helping bring the Proportioner to market,” Tim explained.

The patent-pending Softwash Proportioner has now been on the market – being sold through the Power Wash Store – for about a year now. It is being used by over 200 contractors in four countries. Ramon assured me that he has never made a dime off the sale of a Softwash Proportioner, but he does encourage people to buy them because he is “one of the biggest fans of the machine.”

He also jokes with Tim about making such a quality product. “It’s so well designed that it’s a one-time sale. I told Tim he’s going to need to come up with something else if he wants to get repeat business.”However, Tim’s primary goal for the Proportioner is simply to help others.

“I am overwhelmingly humbled by all the texts, emails, pictures and smiles I receive from people who are working more efficiently because of the Proportioner. They are using the exact same technology I’m using all the time in my own business,” added Tim. “It was never my plan to take it to market. I have a great job. A great retirement. But the Proportioner has been important for me and my own business, and I’m so happy to know it’s positively impacting others as well.”